The Animations tab is located at the Slider settings page. Here you can customize the animations and effects of Smart Slider. 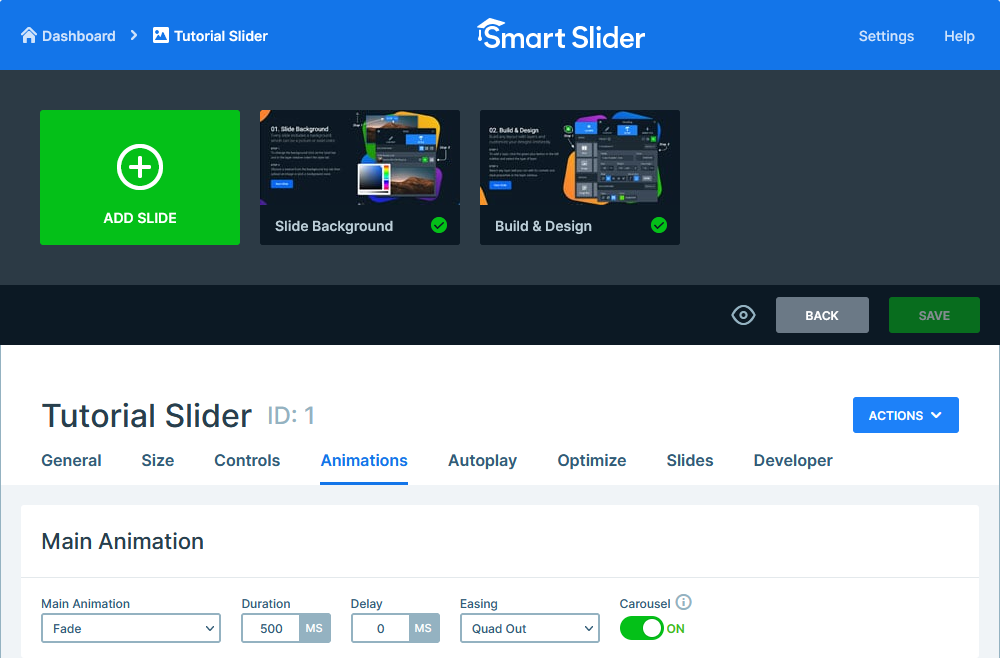 The Main animation has different options at the Simple and Carousel slider types where it's available.

Background Animations are only available at the Simple slider type. Learn more about them!

Ken Burns effect is only available at the Simple slider type and at the Block type.

The Ken Burns Effect is a zooming animation on the background image. You can see a video here and a real example here.

☝️ Note: At the Showcase and Carousel slider the shapes will be below the actual slide, and are below the layers at every slider type.

You can select the Particle effect for your slider. We have predefined particles which you can select, or you can generate your own. When you are done Download current config (json) and paste content into the field of the Custom type particle.

☝️ Note: At the Showcase and Carousel slider the particles will be below the actual slide, and are below the layers at every slider type.

The layer animations play the first time you see the slide. If you turn it off, they'll only play when you visit the slider for the second/third/etc time.

With this option the layer animations and the Ken Burns Effect will be played only one time.

You can set when the incoming layer animations should start, either after the slide switching has ended, or as soon as the switching starts.

☝️ Note: This section is not available at the Carousel slider type.

If you want this effect on phones too, turn this option on. (Some mobile browsers doesn't play the parallax effect, they will only show the start, and the end, but it won't move between, because this is how they optimized their speed, by limiting animations.)

With this option your layers won't only move lower or higher, but they will also bend.

If you choose one of the mouse options, you can choose if you want the parallax distance effect to happen from your mouse cursor or from the center of your slider.

When you are using parallax with page scrolling, the layers could go outside of your slider, which sometimes isn't good, so with this option you can limit down your layers to only move lower or higher with the parallax effect, and stay inside the slider at the other way.

Did this answer your question? Thanks for the feedback There was a problem submitting your feedback. Please try again later.
Last updated on February 3, 2023