If you go to your slider's settings, you can export the slider with the Actions → Export button at your slider

This creates a .ss3 file which you can import immaediately.

or on your Dashboard with the bulk selection by hitting the Bulk Actions → Export button. With this option your can export one or more sliders.

This creates a zip file which you must unzip first. Only the .ss3 file(s) inside are importable!

From the Dashboard you can import a slider if you click on the New Project button and click on the "Or Import Your Own Files" link. 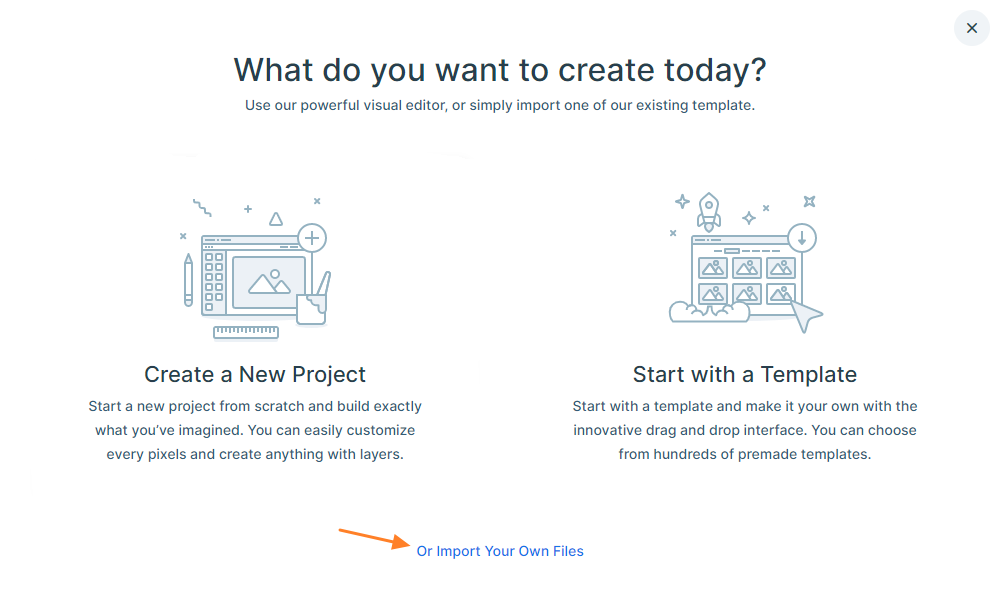 Select your slider then click on the Import button.

You can browse your exported .ss3 file, and import it. If your server has a low upload limitation, which is smaller, than the .ss3 file, you should use the Local import file method instead.

⚠️ Warning: We only support importing .ss3 files, which were exported from Smart Slider 3.5.x!

(For example you cannot import a Smart Slider 3.3.26. slider anymore, as there were too many changes since that version.)

Select the file you have previously uploaded to your server, into this folder:

If you were working on your site on a different domain, and you have the slider's id hardcoded into your template, use this option to import that slider into some other site where you are using the same template.

⚠️ Warning: If you already have a slider with the same ID as the slider that you are importing, then the existing slider will be deleted permanently.

This option decides how the images will be handled in your slider. Please note that this option only affects the images which links are generated with our system, starting with the following $upload$/ on WordPress and $/ on Joomla.

The slider images that were inside the default media folder moved into a special slider[id] folder after importing them.

The URL of the images points to the location where the export file was generated after the import.

You can choose to delete the .ss3 file, after it was imported.

Did this answer your question? Thanks for the feedback There was a problem submitting your feedback. Please try again later.
Last updated on November 14, 2022